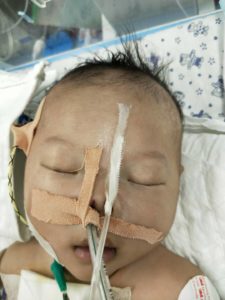 Zheng Muyun is just 2 months old and since he was born has been in the ICU. His heart condition was detected during pregnancy but it was worse than expected. To date Zheng Muyun has had 3 surgeries; the first surgery was at their local hospital in Zhejiang Province and they borrowed money from family.

For the second surgery they again borrowed money and since transferring to Guangzhou he needed to be operated on again. Currently he is still in ICU and a fourth surgery will be required when he reaches 12 months old.

Zheng Muyun’s parents are 30 years old and have tried for many years to conceive a child. They are both unemployed but have previously been in work. The medical bills have used all the money they have raised and they have no other way to raise more.

We are pleased to be able to support this surgery with funds donated by The British School of Guangzhou. A huge thank you to the students, staff and parents for their continued support.